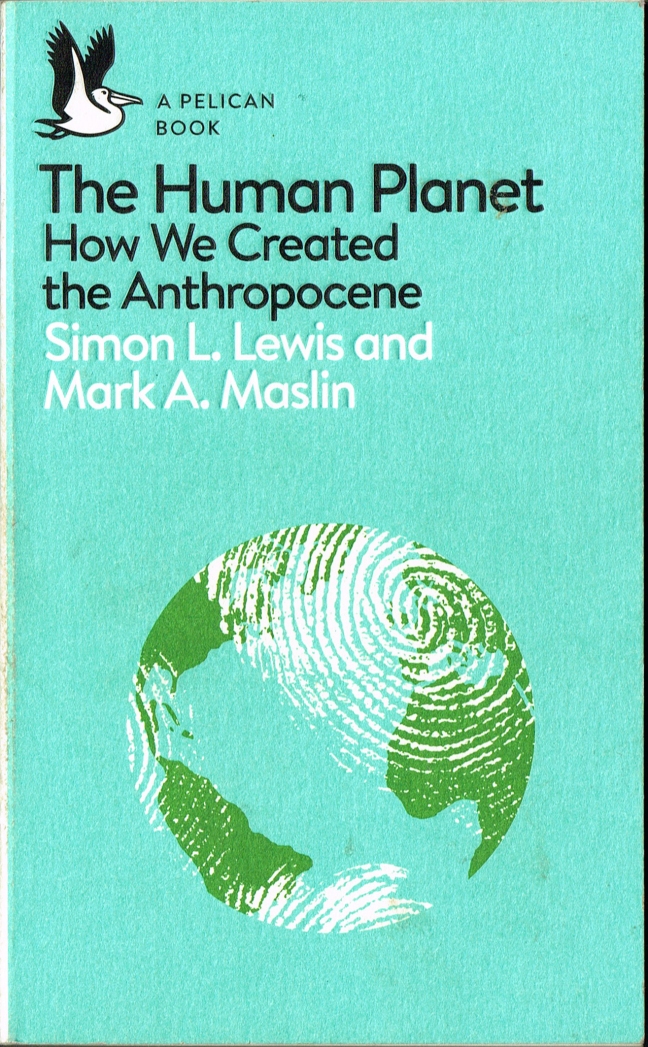 This is in many ways an excellent book, packed with information and ideas. Its central focus is to describe the Anthropocene, but the book, in working towards a definition of the period, both in terms of the criteria that justify it as a bonafide geological epoch and thus its timescale, touches on many interesting areas of the history of the Earth and the development of humankind as well as the formalities of geology and geological periods. There are some very clear diagrams which would serve as good points of reference, valid beyond the specific narrative of the book.

END_OF_DOCUMENT_TOKEN_TO_BE_REPLACED 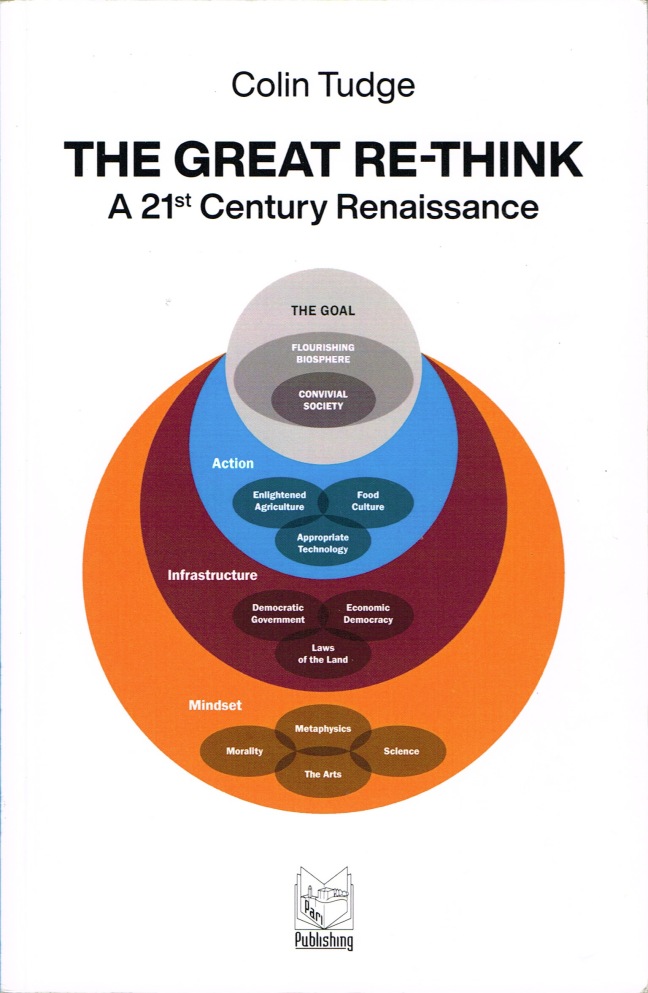 In ‘The Great Rethink,’ Colin Tudge embarks on a penetrating dissection of our current predicament, setting forth an ambitious manifesto for a balanced political, cultural and ecological life. The book certainly provides a good primer on the state of our society and its impact on the natural world. Combining his encyclopaedic intellect with a down-to-earth moral sensibility, Tudge lays bare the mismatch of current politics, culture and industry with a truly sustainable economy.

He brings together sharp logic and real compassion to arrive at this manifesto for a better future. The structural logic, typical of Tudge, is set out in a diagram on the cover of the book (based on his own scribbled synopsis) that really sums up the rationale behind his approach. His formula for human success in the future is encapsulated in the statement of the goal of ‘a convivial society within a flourishing biosphere’. There is not much to argue against here, though our society seems intent on rushing in an opposite direction.

END_OF_DOCUMENT_TOKEN_TO_BE_REPLACED 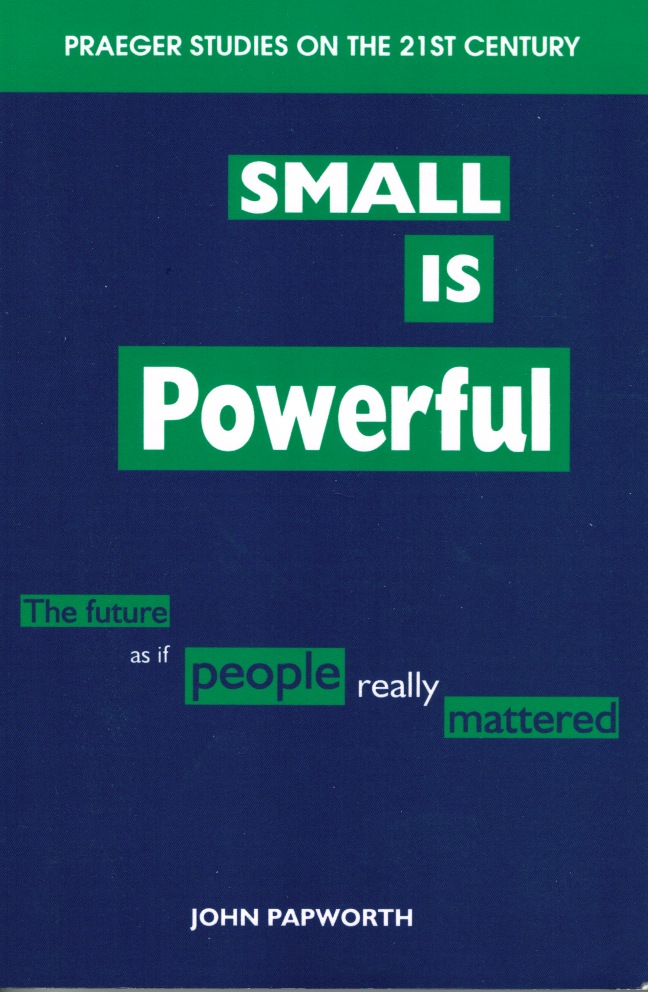 This is a very interesting book that takes a unique view of society and the difficulties it faces––still. It shouldn’t be confused with E F Schumacher’s ‘Small is Beautiful’ which, when it was published took a new look at economics. However the similarity in title of the two books is matched by a similarity of subtitle. Schumacher’s is ‘a study of economics as if people mattered’, whereas Papworth’s is ‘the future as if people really mattered’. Clearly there is influence here, as Schumacher’s book was published in 1973 and Papworth’s in 1995, and there certainly was. Papworth and Schumacher were both in at the beginning of Resurgence magazine, Papworth having founded it in 1966. He is one of those clearly influential and original thinking people who we don’t often hear about now. From an orphanage childhood through various jobs including service in the armed forces to becoming an Anglican minister, his voice & activities became ever more radical.

The essential thrust of the book is a single proposition: that morality is an aspect of human relationships and that direct human relationships can only operate in communities, which are limited in size to the point where, due to numbers, human interaction starts to become impersonal, and therefore profit and/or power orientated and ultimately amoral. It is a strong argument that is pursued relentlessly through the book, somewhat repetitively, but turned over carefully in different contexts and scenarios.

END_OF_DOCUMENT_TOKEN_TO_BE_REPLACED

This is an extraordinary book, described by others as ‘ambitious’ and ‘magnificent’. It essentially tells the story of how the mark of mankind has shaped the landscape we now live in from the retreat of the ice and severing of the land bridge to continental Europe through distinctly differing epochs up to current times.

For anyone interested in the ‘physical’ history of our island (as I am) this is a treasure house of information, both in its scope and in its detail. The social forces that created barrows, henges and other major earthworks at the dawn of The human occupation of Britain are described in their distinct periods and in the context of their differing social backgrounds and functions. Sometimes speculative, but always well researched the writing is as compelling as a good novel, leading the reader on from the earliest times, through the brief Roman era, on to the dark age decline and then the revival of feudalism.

END_OF_DOCUMENT_TOKEN_TO_BE_REPLACED

This book has a strong presence on the shelf and I was persuaded to buy it in advance of other reading I still have to do. I was particularly attracted by the fact that both the authors were part of the team that delivered the Paris Accord in 2016 and therefore I thought that they must be coming from a position of authority and experience.

END_OF_DOCUMENT_TOKEN_TO_BE_REPLACED 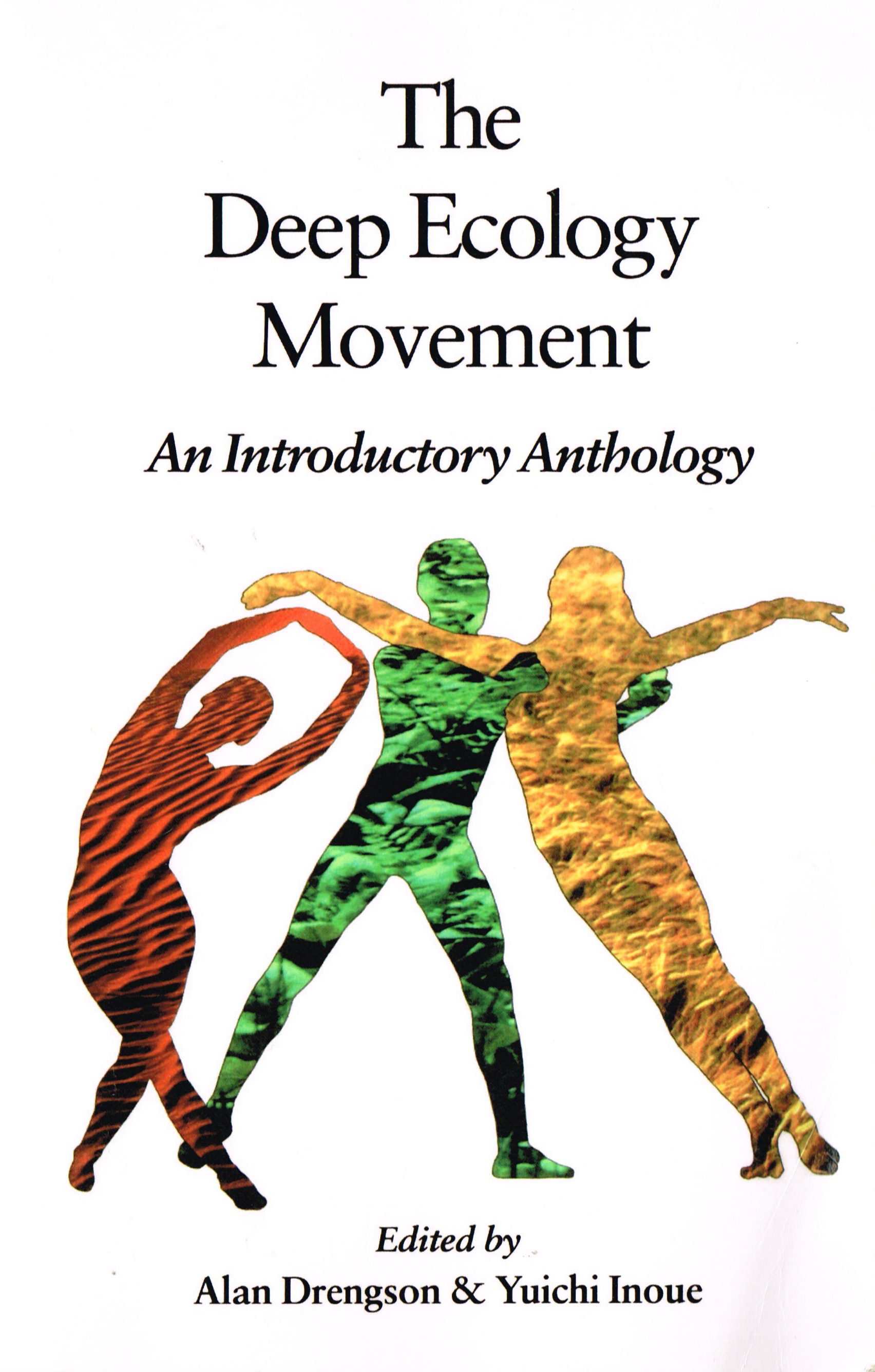 Published in 1995, this anthology provides a very good comprehensive overview reference to the many facets of the Deep Ecology movement. The introduction by authors Alan Drengson and Yuichi Inoue provides a good synopsis of the main tenets, sources and issues that define the Deep Ecology movement. Following chapters start with the seminal papers of Arne Naess who coined the term ‘Deep Ecology’ and set out a formal philosophical framework encompassing the ecological principles that stem from the distinction between ecocentrism and anthropocentrism–deep ecology and conservation ecology. The book then broadens the subject with contributions from other Deep Ecology luminaries including Gary Snyder, Bill Devall and Warwick Fox. END_OF_DOCUMENT_TOKEN_TO_BE_REPLACED 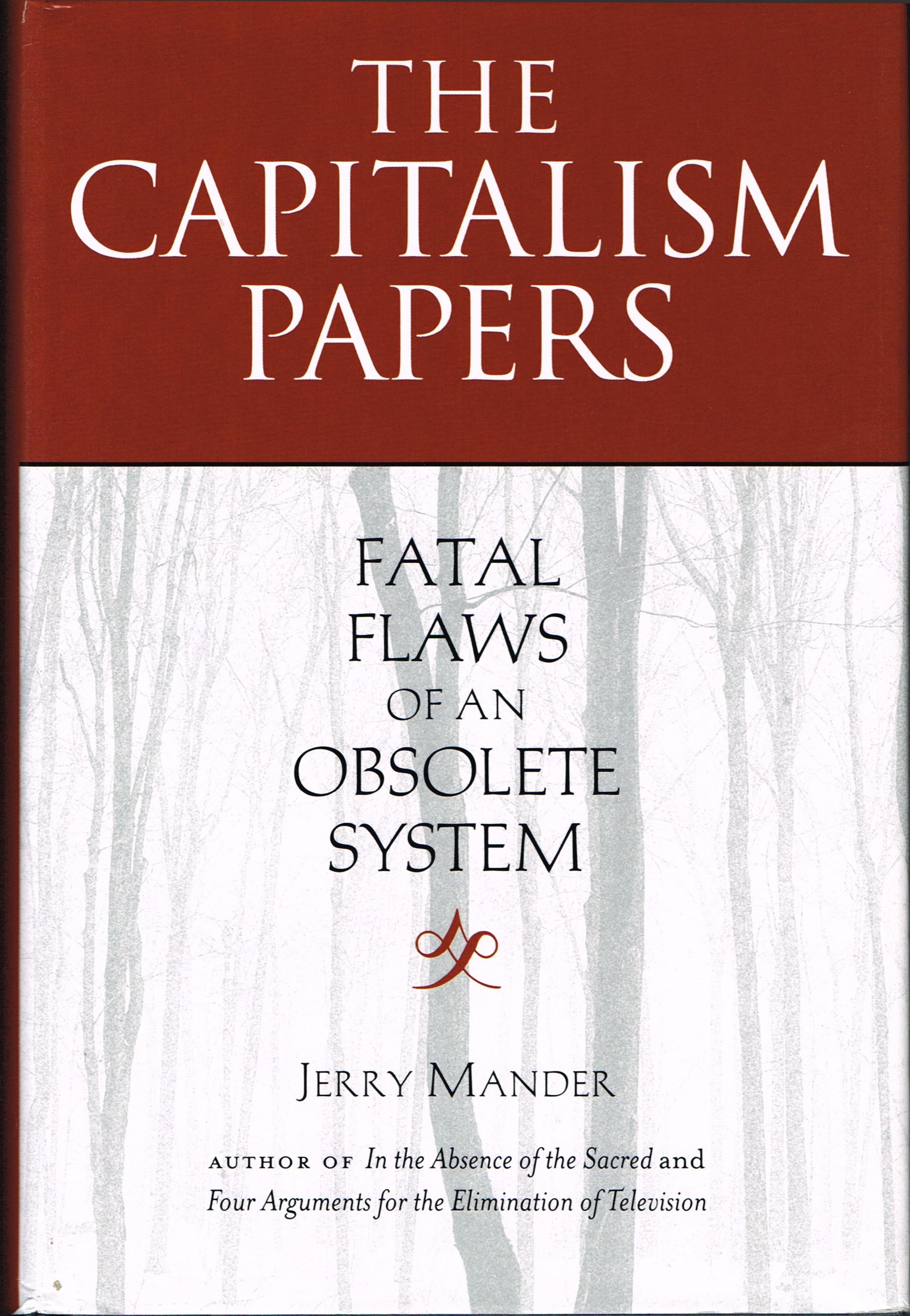 In inimitable fashion, Jerry Mander attacks the principals, structure and operations of Capitalism without mercy. It is a convincing critique from a declared non Socialist or Marxist. Mander takes apart the fundamental drivers of the Capitalist system: the need for unending growth and the implicit faith in GDP as a measure of economic success, but he also lays bare the infiltration of the amoral giant national or international Corporation (the cornerstone of the capitalist economy) into all sectors of the supply of material goods and services. The single objective of creating wealth for shareholders, he believes, is held above all other values and motives. END_OF_DOCUMENT_TOKEN_TO_BE_REPLACED 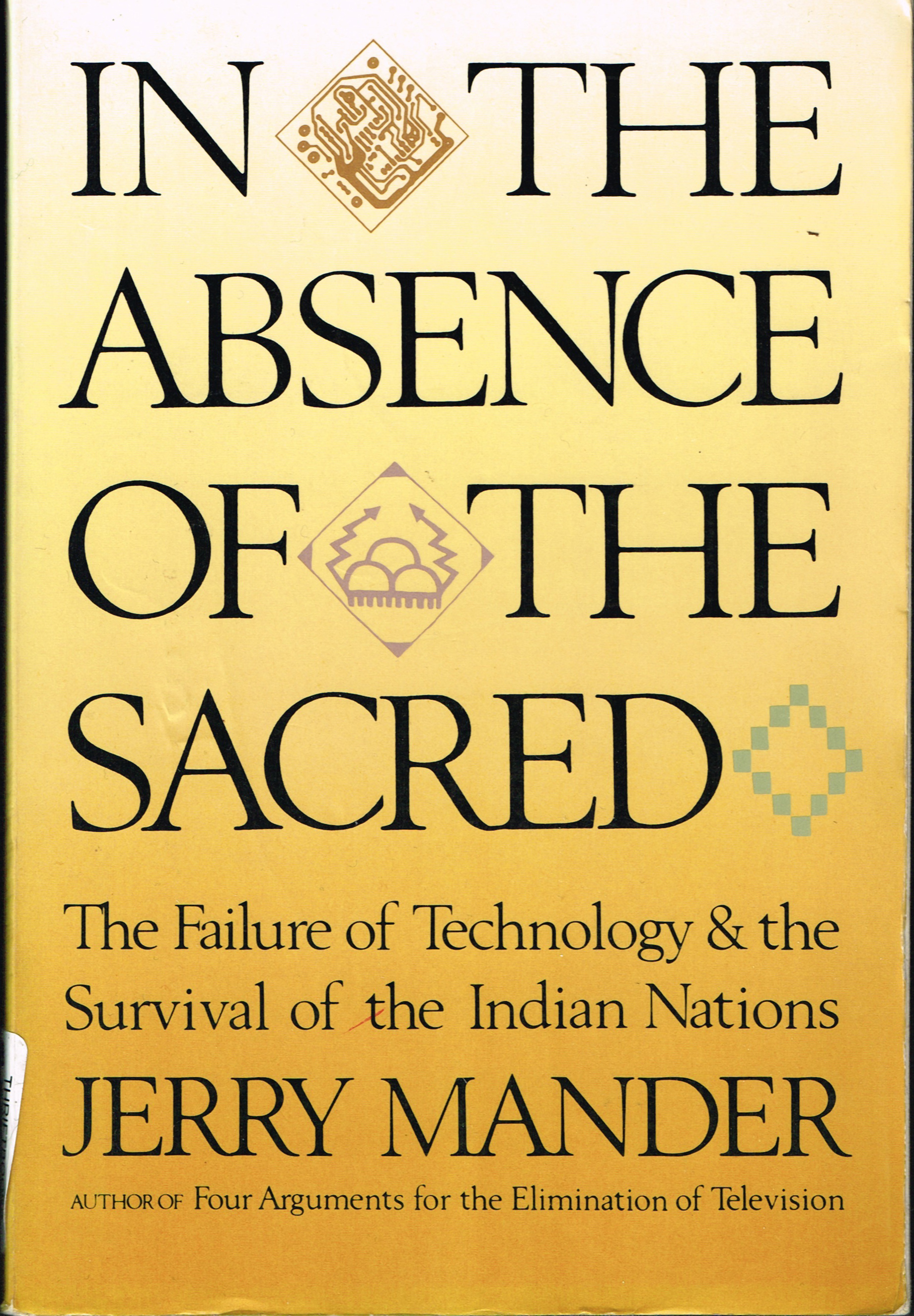 Drawing together two seemingly disparate strands, Jerry Mander produces a potent critique of North American culture. His scrutiny of industrial technology is compelling, drawing out the downside of even the technologies we might believe are personally liberating: television, the computer and the corporation are all exposed as a combined force to homogenise our personalities, our lives and the environment. The relevance of the title “In the absence of the sacred” becomes clear when he turns to the plight of the American Indian. END_OF_DOCUMENT_TOKEN_TO_BE_REPLACED